A set of particle systems is done to handle a collection of systems that can be played all together according to their properties (start time, end time etc.). The Editor provides a tool named Particle System Creator that allows to create sets and add / edit / remove systems from these sets.

The workflow tends to:

To add a new set you'll edit using the Particle System Creator tool, you first have to add a new set in the assets library. In the assets panel, a tab named Particles shows you all the available particle system sets in the current project.

To add a new set, just click the button Add and give it a name. Once confirmed, a new set is available. 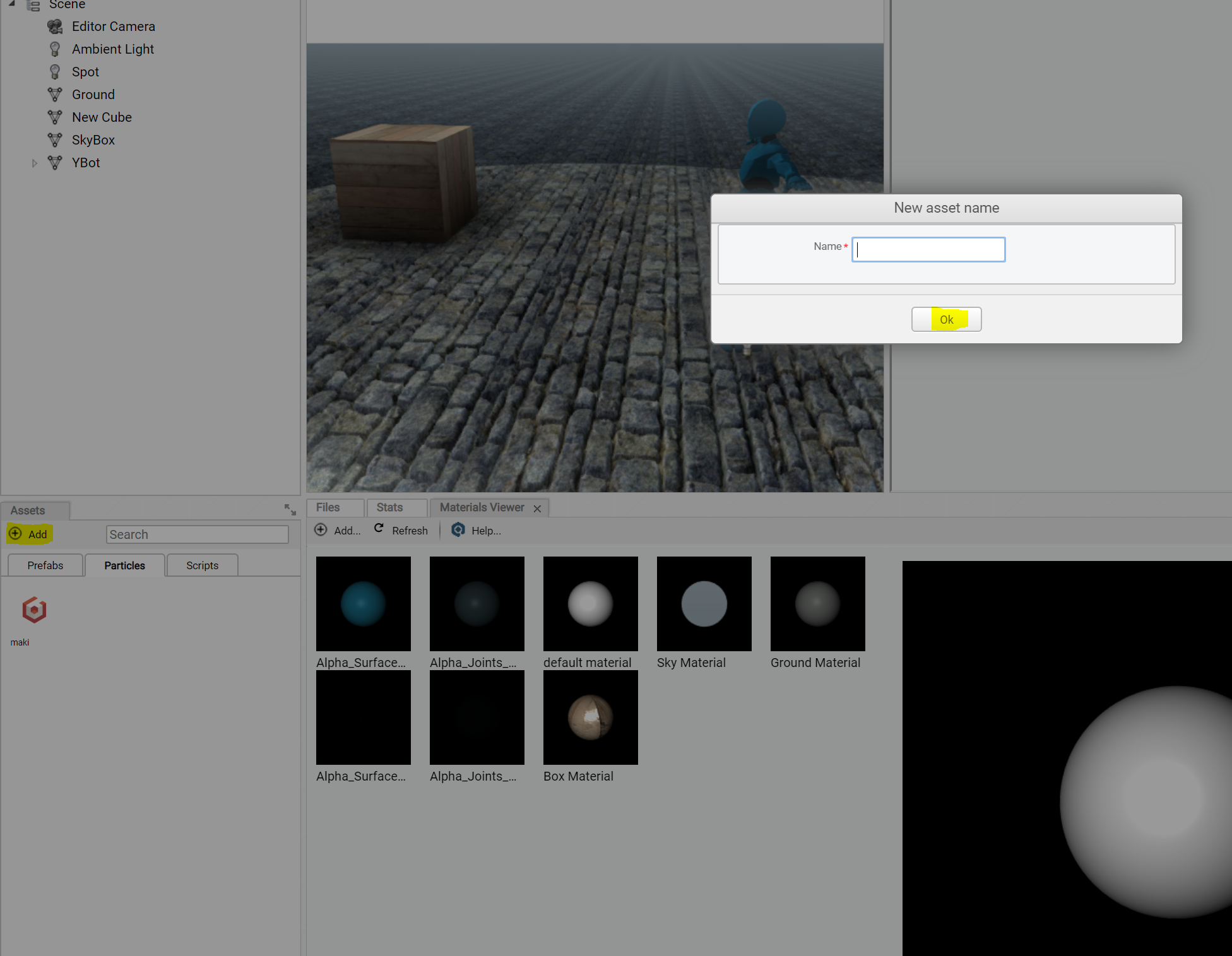 To load the Particle System Creator, just double-click on the asset and the tool will open and load the selected particle system set.

The tool is set of two panels:

The overall timeline can also be drag'n'dropped to translate its content by drag'n'dropping the timeline's background. Using the mouse scroll, you can zoom/unzoom the time scale of the timeline.

Still using the timeline, when you click a system, the Editor's Inspector will be updated to show the selected particle system's properties. When you modify a property, the result is applied in the realtime preview panel of the tool.

The set is saved automatically.

Adding a new system to the set

By default, a new set is composed of a default system. Fortunately, you can add new systems to the set. To add a new system, just click the tool's toolbar Add System.... A dialog will appear to ask the new system's name. Once confirmed, the timeline is updated and a new row is created with the new system.

You can now edit the new system.

Removing a system from the set

Hopefully, you can also remove a system from the set. Just right-click on the system in the timeline and select Remove in the context menu.

Note: Undo/Redo is not yet supported in the tool, be careful before removing any system.

Once you are happy with the current configuration of the set, you can preview the result by clicking on the tool's toolbar Reset. This will stop all the active systems and restart the set.

Once started, the timeline's cursor (reading head) will show the current progress in time of the set. Each time a system is started, the system in timeline will be animated to visually notify that it started.

The current set being edited can be exported. It is typically useful to re-use later in other projects or to populate a collection of particle system sets.

To export a set and sanve on the local file system, just click the tool's toolbar Export As....

A dialog will appear to ask if the exported set should embed the textures content:

Importing from a set

In case of you have already exported a set, it is possible to import systems from a saved set to the current set being modified in the Particle System Creator tool. To import a set, just click the tool's toolbar Import From.... A dialog will appear to select the set's .json file to import.

Once confirmed, all the systems and textures will be imported to the current set.

BabylonJS provides a list of already built sets: https://doc.babylonjs.com/how_to/particlehelper#available-effects. It's useful to start from these presets as they are also good examples to understand how to build a cool particle system set.

Note: an internet connection is required to load the following presets.

The Particle System Creator allows to download these presets using the tool's toolbar Presets. Once clicked, let's choose the wanted preset. A dialog will appear to ask if you want to override the current set:

Example with the explosion preset: https://www.babylonjs-playground.com/#X37LS1#3 -

Adding a set to the current scene

Note: editing a set using the tool will not edit the systems already instanced in the scene.