Introduction to Shaders in BabylonJS

A shader is a program processed by the Graphical Processing Unit (GPU) to produce a screen image by manipulating data to produce individual pixels. The GPU is optimised, through parallel processing, to deal with these thousand of operations in an extremely fast way.

To produce a BabylonJS scene, code is written in Javascript which the BabylonJS Engine processes and displays the result on screen. The scene can alter through changes to the meshes, the lights or camera position. To show possible changes in a timely way the screen display (frame) is re-drawn up to 60 frames per second.

Simplifying, the process is

For example the BabylonJS Engine takes this code

and turns it into vertex data including positions, colors and normals.

The BabylonJS Engine creates the shader code for this data and is passed to the GPU.

Much more than this as well as Scene Code you can write your own user Shader Code so that the process becomes:

Fragment Shaders are sometimes refered to as Pixel Shaders. 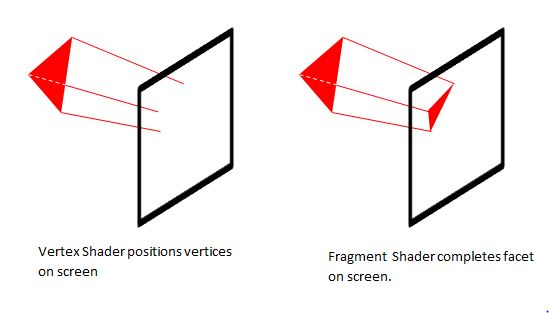 All variables used in both shaders must be given a type and any numbers assigned to the variable must be consistent with its type.

The following example with throw an error:

Some examples of types are

Since vertex positions need to be as accurate as possible all floating-point numbers should be set as having high precision. This is done at the start of the code for each shader using:

The GLSL language has a number of built in variables. Two are vital to the operation of the two shaders and are always necessary:

Functions needed to be typed as do their parameters and have the form:

Both the Vertex and the Fragment Shader are run from a function which must be called main and be of type void since it returns no result. It must also must type the empty parameter list as void: 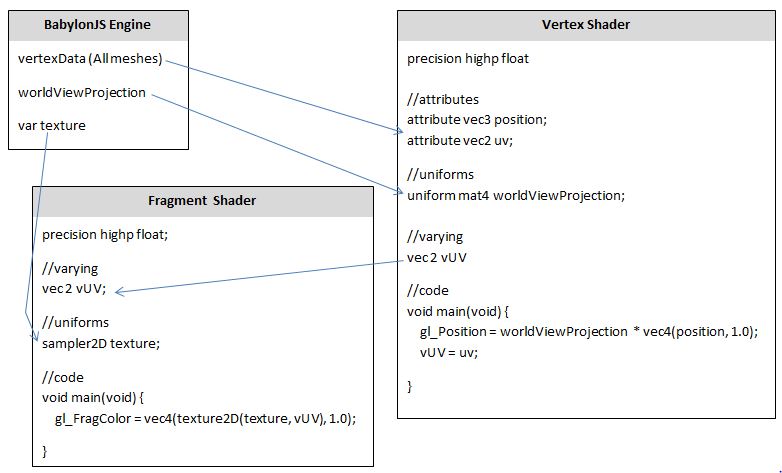 Here are four ways of putting shader code into your scene:

More details on this can be found below.