Now that we have our character moving around, let's give them the ability to navigate platforms!

First we'll start by adding in inputs for our jumping and dashing to inputController.ts! Inside of updateFromKeyboard we just need to add:

this.dashing and this.jumpKeyDown will be used to control the actions based off of conditions being met in characterController.ts.

Here we'll be focusing on _updateFromGroundDetection. We'll be adding and updating what we wrote in part 1's gravity.

Here we're checking whether our jumpKeyDown is true and the jumpCount is > 0. If these are true, then we add to our gravity a jump force (which is defined as a negative number) to propel a force upwards so that the character jumps.

We want to reset the jumpCount back to 1. This is where you could potentially allow for double jumps, but I chose to stick to a single jump mechanic.

I specifically added the implementation for detecting slopes because I wanted there to be stairs in the game. This served to be a challenge because meshes use their actual geometry, so in order to accomplish a smooth walking movement along stairs, I needed to create invisible colliders. These were just box meshes that were rotated to have the flat side along where the stairs would be (essentially a slope). 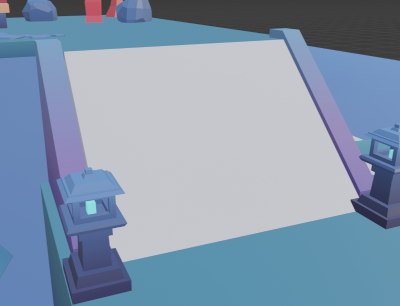 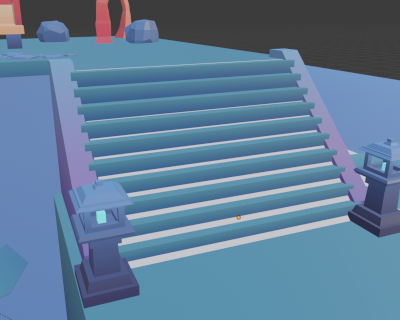 Then I had to differentiate between stairs and non-stairs. The way I did this was by comparing the angles between the normal of the mesh and the up vector (this took some testing to find a good range).

The _checkSlope function can be broken down as follows:

Now, we want to update our if not grounded check to take into account slopes:

We are checking for slopes here because as the character walks along the slope, they're actually considered not grounded based off of the single center raycast that we're doing in the _isGrounded function. Thus, the player has gravity continuously acting on them, pushing them down the slope.

This is why we check for whether we're on a slope, and then remove gravity, and fake being grounded. We also only check if our gravity tells us that we're walking up the stairs and not down, so essentially as our character "walks" down the stairs, gravity is acting on them (kind of like in real life!)

Dashing was another mechanic that I thought would be useful for a platformer. Since this game is based on time, I wanted to add a limitation on the dash mechanic so that it wouldn't become the main mode of transportation. Thus, the dash move became an air-dash that's limited to being used once until you touch a ground again.

For the dashing implementation, we return to _updateFromControls.

This seems like a lot of conditions, and that's because we're limiting the dash to a single instance if we're in the air.

If we've begun our dash sequence, we want to increment our timer every frame. If we are in the dashing sequence, we set our dashFactor. If we've completed our dash, we reset our timer and set _dashPressed to false to exit the sequence.

Returning to the grounded check, this is where we want to reset our dashing ability.

We want to update _updateFromControls to now take into account our dashing.

Previously where we just normalized our move vector, we want to multiply by the dashFactor to give it that extra bit of movement in the direction we're currently moving.

Now, if we run the game, we should be able to move, jump, and dash! You will notice that we still have that issue of falling into the ground. I am not sure why this is happening, but it doesn't happen once you import the final mesh. However, early on in the development I had fixed this issue before re-writing the gravity & jumping code. You can take a look at what I did here. Essentially, We have re-adjust to account for how much we would fall through. In addition, having more raycasts that are longer will help in detecting the ground earlier.