After considering the issues involved and slow slow particles we are now ready to consider free particles, ones that move with no restriction to their start position or velocity.

The velocity of a particle is its displacement per frame.

Colliding with a Wall

For example consider a left hand wall, with plane parallel to the YZ plane, and a particle travelling towards it with velocity (dx, dy, dz), dx < 0.

In frame n, the position of the particle is (x, y, z) and during the time between frame n and frame n+1 it overlapped the wall. At frame n+1, the particle may still be overlapping the wall and its centre may be to the right or left of the wall or, the particle may have gone beyond the wall completely. The 2D diagrams show the latter case but the calculations apply in all cases. Fig 16 indicates the particle passing through the wall.

Sometime between frame n and frame n+1 the particle would just touch the wall as in Fig 17. 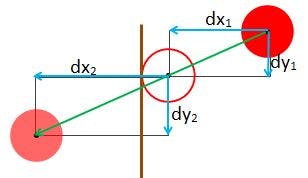 At the point of contact with this wall the component of velocity in the x direction would reverse and so the remaining x axis displacement before frame n+1 would be -dx2, see Fig 19.

This means after frame n is displayed the particle's position has to be reset as indicated.

Given a two particles P and Q of radius r, at positions p and q with velocities v and u repectively travelling towards each other in frame n. In frame n+1 the centres of the particle are at p + v and q + u. Between frame n and frame n+1* the two particles would collide when there is a time t <= 1 when the distance between the positions of the particles is 2r. See Fig 22.

There will be a collision between frame n and frame n+1 provided b2 - 4ac > 0. In this case there will be two solutions for t the smallest value being where the particles first touch and the other at the end of the overlap.

Based on the above the following Playground shows two spheres and their paths. Should they collide their positions at first touch are shown. Their start positions and velocities may be set at lines 35 to 38.

Since only the velocities along the line joining the centres of the particles are affected during the collision we need to consider axes along this radial line and a tangential line. The particles are at first contact at time t, with P at p + vt and Q at q + ut

Given that the particles collide between frame n and frame n+1 what will the positions of P and Q be during frame n+1?

Fig 24 shows the rearrangement of the component displacements and positions of the spheres when the collision is detected and component velocities along the line joining the centres are exchanged. Just before frame n+1 this gives 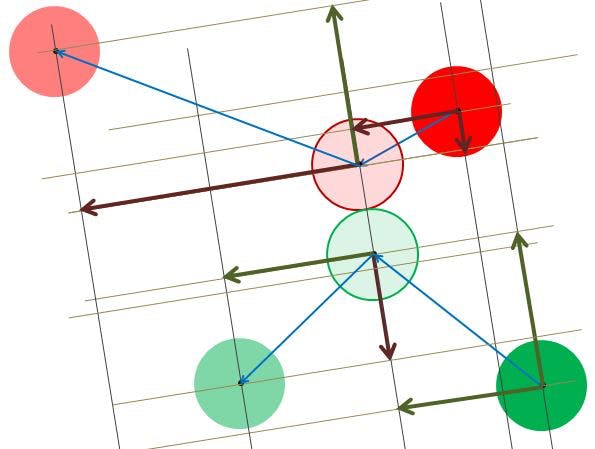 After a collision these values are used to recalculate the positions of particles before frame n+1.

The following Playground shows the first contact position of two particles and their paths before and after collision. Start position and velocities may be set on lines 36 to 39.

This Playground fires particles randomly towards each other to see the effect when they collide.

A Multitude of Particles

Combining all of the above the following Playgrounds put many particles inside a box and have them collide with the box and each other.