To start, Carlos (the 3D artist) spent a good amount of time talking to Diane (the Babylon developer) to make sure they were on the same page regarding what features the art should have. Both were of the opinion that the visuals should be directly dictated by the art as much as possible; in other words, as much as possible, art decisions should be made by an artist in art tools, not by a programmer in programming tools. Thus, they ultimately decided that following major components should be controlled from within the art assets:

That feature list also doubled as a pretty decent roadmap; so, with a plan in place, Carlos got started by creating...

Dev Stories are not implementation guides or tutorials, so the precise details of how Carlos modeled the main watch asset are beyond the scope of this narrative. Instead, this section will provide high-level perspective on the key decisions and implementation choices Carlos made while creating the main Vaporwear watch asset.

While working on the main asset, Carlos periodically wanted to check that the asset would render the way he expected it to in the final experience. (The various previews available in Blender, his tool of choice, often rendered things differently than a 3D Commerce-certified renderer would.) The best way he found to see how the model would actually render was to export it to a GLB, then drag-and-drop that GLB (along with his intended IBL lighting) into Babylon's 3D Commerce-certified version of the Sandbox. Not only would this render the model in a standard way, but it would actually render it using Babylon.js, meaning that the code rendering the model in that Sandbox would be the same code rendering the model in the real experience on the Vaporwear site. Thus, by viewing his model using that Sandbox, he could be sure he was seeing the model (animations and all) the same way that customers eventually would. 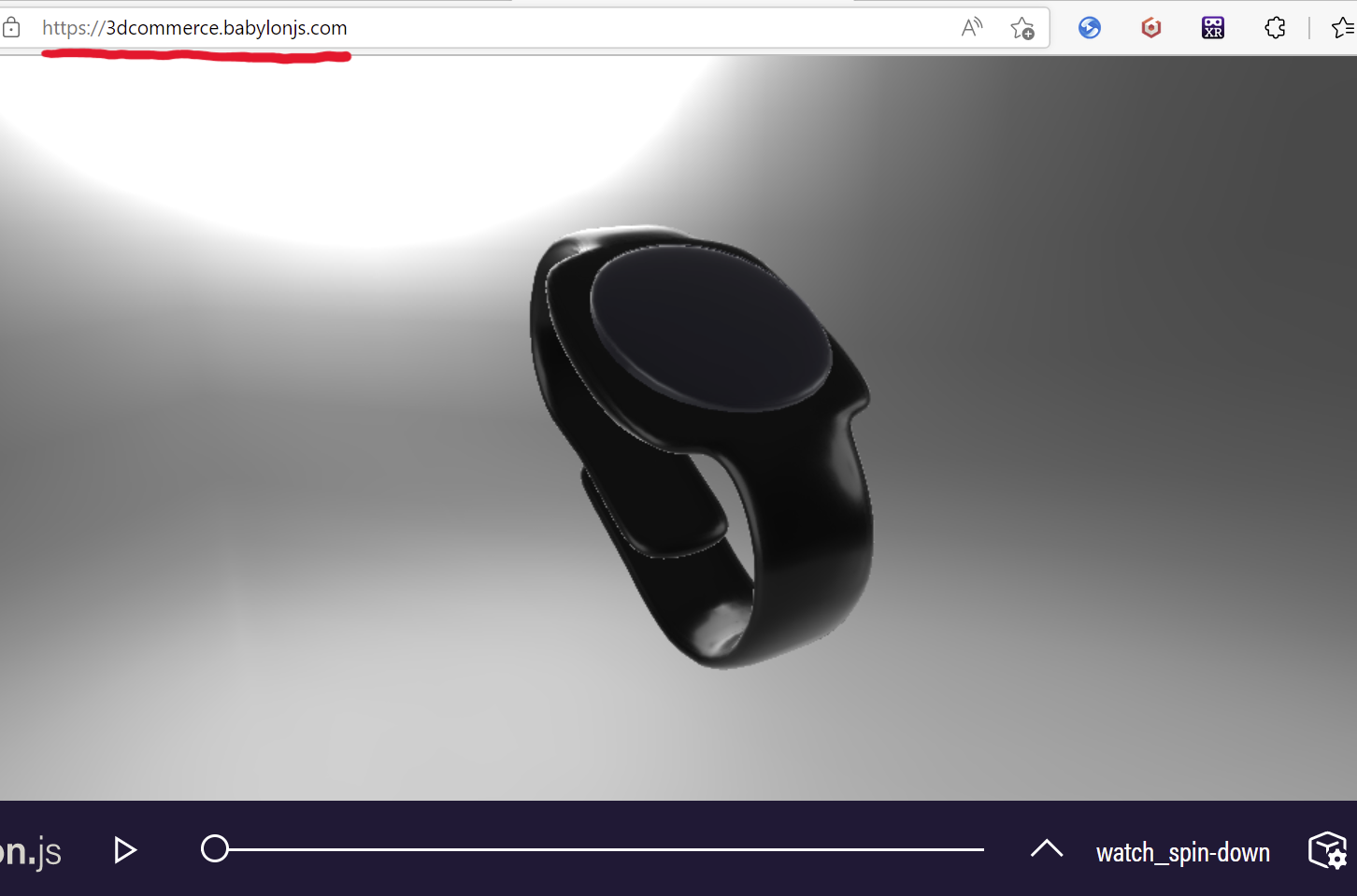 Note that the main asset's visuals weren't the only things that would be included in the main asset file; small amounts of data for camera motion and hotspots would also need to be included, as will be discussed later. However, Carlos didn't want to tackle those features until he'd finished with the visuals, so once he had the main asset built he moved on to creating the configuration options.

The configuration options for the Vaporwear smartwatch were essentially all the ways customers could customize it, so Carlos had to work closely with Allan from Vaporwear to make sure all the options were representable and looked correct. The available options were as follows:

From an art perspective, these options boiled down to two underlying operations:

Allan also told Carlos that Vaporwear might add new stud configurations later, or new kinds of bands, etc., and that he should design his approach to the art with that in mind. For this reason, Carlos decided to have the additional "stud" geometry in its own file, then have another file essentially full of nothing but materials; that way, more additive geometry or additional materials files could be added later on by just continuing the pattern established while making the first batch of assets.

Creating the "studs" asset was quite straightforward, with only a few noteworthy "tricks."

Again, the best way for Carlos to know for sure how his model would render was to export to GLB and view it in Babylon 3D Commerce-certified Sandbox. He was even able to use the Inspector to modify the gemstone material as a preview of what it would look like with another material.

The materials are, very often, the most important factor in determining how a rendered model looks; they are also, very often, by far the largest piece of the file size of a 3D asset. Several of the materials Vaporwear wanted as configuration options, particularly for the watch band, were very high-quality and consequently very large. Because these materials were bundled into a separate file just for materials, they thankfully wouldn't delay the experience as they could be downloaded asynchronously in the background. Even so, Carlos remained mindful of the file size and used what tricks he could to minimize the megabytes without sacrificing visual quality.

Even with all these tricks, the additional materials file ended up weighing in at a whopping 15 megabytes, far too large to load in the foreground of a Web experience, but acceptable for loading in the background. As before, Carlos double-checked how the materials would render using Babylon's 3D Commerce-certified Sandbox. With the materials finished, he'd now completed all of the art work that could be looked at; next he needed to decide how the art should be looked at.

Hotspots are points of interest in the 3D scene that can be tracked so that 2D UI (markers, labels, etc.) can be connected to specific locations in the 3D scene.

As with the camera motions, these hotspot parameters were added to the main asset file: they were very small and could be needed very early in the experience. With the addition of these hotspots, Carlos now had all the art features needed for the Vaporwear experience; and after checking one last time in Babylon's 3D Commerce-certified Sandbox that all three GLBs included everything they should have (and only what they should have) and rendered the way he wanted, Carlos passed the GLBs along to Diane to be incorporated into the 3D part of the new Vaporwear site.