Lights are used, as you would expect, to affect how meshes are seen, in terms of both illumination and colour. All meshes allow light to pass through them unless shadow generation is activated. The default number of lights allowed is four but this can be increased. 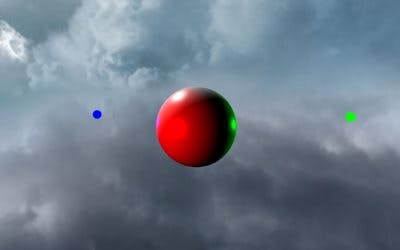 A pretty sphere with multiple lights

There are four types of lights that can be used with a range of lighting properties.

A spot light is defined by a position, a direction, an angle, and an exponent. These values define a cone of light starting from the position, emitting toward the direction.

The angle, in radians, defines the size (field of illumination) of the spotlight's conical beam , and the exponent defines the speed of the decay of the light with distance (reach).

A simple use of a spot light

There are three properties of lights that affect color. Two of these diffuse and specular apply to all four types of light, the third, groundColor, only applies to an Hemispheric Light.

In these playgrounds see how the specular color (green) is combined with the diffuse color (red) to produce a yellow highlight.

White hemispheric light with a black groundColor is a useful lighting method.

Babylon.js allows you to create and register as many lights as you choose, but know that a single StandardMaterial can only handle a defined number simultaneous lights (by default this value is equal to 4 which means the first four enabled lights of the scene's lights list). You can change this number with this code:

But beware! Because with more dynamic lights, Babylon.js will generate bigger shaders which may not be compatible with low end devices like mobiles or small tablets. In this case, babylon.js will try to recompile shaders with less lights.

On, Off or Dimmer

Every light can be switched off using

and switched on with

Want to dim or brighten the light? Then set the intensity property (default values is 1)

When a light is created all current meshes will be lit by it. There are two ways to exclude some meshes from being lit. A mesh can be added to the excludedMeshes array or add the ones not to be excluded to the includedOnlyMeshes array. The number of meshes to be excluded can be one factor in deciding which method to use. In the following example two meshes are to be excluded from light0 and twenty three from light1. Commenting out lines 26 and 27 in turn will show the individual effect.

Example of Excluding Meshes to Light

How lights react to a mesh depend on values set for each mesh vertex termed normals, shown in the picture below as arrows giving the direction of the lighting normals. The picture shows two planes and two lights. One light is a spot light, the other is a point light. The front face of each plane is the one you see when the normals are pointing towards you, the back face the opposite side.

A blue back-faced plane and a blue front-faced plane, with a spot light and point light

As you can see, the lights only affect the front face and not the back face.

Complex lighting can be computationally expensive to compute at runtime. To save on computation, lightmaps may be used to store calculated lighting in a texture which will be applied to a given mesh.

Note: To use the texture as a shadowmap instead of lightmap, set the material.useLightmapAsShadowmap field to true.

This will cause lightmap texture to be blended after the lighting from this light is applied.

This is the same as LIGHTMAP_DEFAULT except only the specular lighting and shadows from the light will be applied.

This is the same as LIGHTMAP_DEFAULT except only the shadows cast from this light will be applied.

In some cases it would be nice to define the diffuse color of the light (Diffuse gives the basic color to an object) from a texture instead of a constant color. Imagine that you are trying to simulate the light effects inside of a cathedral. The light going through the stained glasses will be projected on the ground. This is also true for the light coming from a projector or the light effects you can see in a disco.

In order to support this feature, you can rely on the projectionTexture property of the lights. This is only supported by the SpotLight so far.

In order to control the projection orientation and range, you can also rely on the following properties:

The projected information is multiplied against the normal light values to better fit in the Babylon JS lighting. It also only impact the diffuse value. So it might be necessary to change the specular color of the light to better fit with the scene.