In this tutorial, we are going to learn how to manipulate Sprites. Sprites are 2D image/animation, and we will use them to display an image with alpha channel. Sprites always face the camera.

Nowadays, sprites are often used to display animated characters, and for particles, and to simulate 3D complex objects like trees. Think of these as simplified "Entities" that are being all rendered in a single draw call per manager.

Any grid like implementations (in a 2d or 2.5d game level for instance) that require thousands of sprites to be animated and rendered require a special system called a Sprite Map which we will cover later. This is available from BJS version 4.1

Individual sprites are collected together in a single image file called a spritesheet or texture atlas.

For sprites the use of one of these managers is mandatory, even for one sprite. They optimize GPU resources by grouping in one place multiple instances of a sprite.

For sprites of the same size you use

When creating a sprite manager, you have to decide a few parameters:

To give another example, look at this snippet:

This time, we only want 2 instances, and we said that our sprite’s size is 64x64. Here is what our image looks like:

Each image of a sprite must be contained in a 64 pixel square, no more no less.

Sprites can be picked to interact with like in this example: https://www.babylonjs-playground.com/#9RI8CG#0 -

To do picking you can use the scene.pickSprite:

You can also use multiPickSprite to get all the sprites under the mouse:

By default picking will use the bounding rectangle of a sprite (for performance reason). You can set system to use sprite alpha value instead (coming from its texture). Picking will work in this case only if alpha > 0.5.

This is available from BJS version 4.1

For sprites of varying sizes you need an image file and a JSON file containing the positional data of the sprites in the packed spritesheet. The image file and the JSON file should have the same name and be in the same folder, eg pack1.png and pack1.json.

It is also possible to reference an existing JSON object, of the correct format, directly. In this case the JSON object is passed as an additional parameter. For example: 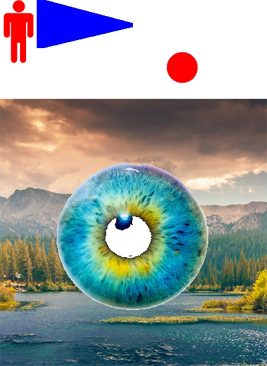 The JSON format for the above file is based on that produced using the TexturePacker app with output file framework set to JSON(Hash) and Trim to None and Allow Rotation to Off. For the above packed spritesheet TexturePacker outputs

SpritePackedManager only uses the frame property for each sprite so the minimal JSON format is:

However, it is recomended that you use the full file format cited above the previous image if you plan to use any SpriteMaps in your project.

For both managers, we can create instances of a sprite linked to a manager. Creating an instance is as simple as:

which uses the first sprite on the sheet.

Using a uniform spritesheet and SpriteManager you indicate which sprite to use will cellIndex, counting from the top sprite on the left in order right and down.

Using a packed spritesheet and SpritePackedManager you can either use cellIndex, as above, or the cellRef, the name of sprite.

You can change its size, orientation or reflection:

Starting with Babylon.js v2.1, you can define the sprite's width and height:

One of the advantages of sprites is animations. The most straight forward way is to use a uniform spritesheet and SpriteManager. You only have to load one large image file which will contain all animation images, one next to another. Just be careful to respect the pixel size that you have specified in the manager. For example with this spritesheet of players:

We can use this to animate our players in more than 40 positions, depending upon the situation (walking, jumping,…).

If you want to begin the animation, simply call this function:

The player sprite will be animated from frame 0 to frame 43. The third parameter is indicating if this animation will loop or not, true to loop. The last parameter is the delay between the frames (the smaller it is, the faster the animation).

It is also possible to use playAnimation with sprites from a packed spritesheet. It is worth double checking that the sprites to animate are consecutive and in the correct order in the JSON file.

tarting with Babylon.js v4.2, you can edit sprite managers using the Inspector. You can then save them on Babylon.js snippet server. When you have a snippet Id, you can easily load the manager using the following code:

This is available from BJS version 4.1

Certain situations are outside of the scope of the standard Sprite Manager. These are generally when you need to render thousands (dare I say millions?) of animated sprites on screen. Usually situations like this are reserved for 2d game design, but there are other situations where this would be beneficial. For now we will focus on specifically the topic of 2d and 2.5d level design. The only current limitation of this system is that the positions of the sprites are static to a specific grid dictated by the Sprite Maps initializing parameters.

The SpriteMap is displayed on a standard Plane Mesh and has the ability to be transformed in 3d space. Each SpriteMap is one draw call and reserves a minimum of 3 texture buffers in memory, more depending on the number of layers in the system.

It uses the same JSON formats as the Packed Manager. But does support the options for rotation, extrude and padding. Soon the trim support will be functional as well

To create a SpriteMap is simple:

There are several parameters you can pass to the options object, each one will help the Sprite Map reserve the proper data buffers in memory and get the system prepared for display.

After initialization you can change the rotation and position of the output by referencing the spriteMaps.position | rotation like a standard mesh. Any other option change (like stageSize, or layerCount etc...) its recommended that you dispose the map and re-initialize with the correct options.

Each Sprite map is comprised of a number of tiles of equal size, splitting the output plane into a grid.

To change what tile is at a certain location we call this method:

If you are going to make multiple changes at once add all the tileID Vector2's of like frame ids into an array and pass that to the tileID parameter. Otherwise the buffers have to be updated for each tile instead of in batches which is not optimal.

It is recommended that you find a single transparent pixel on your Texture file, or create a "blank tile" in your JSON file, so you can have fully transparent tiles when the cell needs to be blank.

This is easy to do in the full example below I just added:

to the top of the JSON frames Object which points to a single pixel on the Texture file. In the shader this is scaled up to the correct Size and displayed then in the entire tile as transparent data.

After you have created a SpriteMap that has the correct tile positions, you can export and save this composition for later use. When loading the ".tilemaps" file back into the system you must be sure that the SpriteMap you are loading it to has the correct layerCount otherwise you will drop webGL errors.

Now comes the time where you want to initialize animations for the tiles in the system. One limitation is that you can have only one animation sequence assigned per frame. This does not limit you though, as you can make duplicate frame references in your JSON file and then just assign a different animation to the added frame. You do currently have to "compose" the animations though similar to creating the tilemaps. This does not have an export option as of yet.

To create an animation assign each cell.

I know this might sound complex but take a look at the examples for a better understanding.

Having learned about sprites, it’s time to move on to use them in a classic effect in 3D : particles.